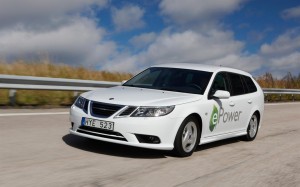 The first electric Saab is called 9-3 ePower Concept, just presented at the Paris motor show just ended on October 17. This is a version zero-emission 9-3 SportHatch based, then this is the first electric powered wagon in the world. After the exhibition in the french capital, 70 units of Saab ePower 9-3 will be used next year for several tests to assess the opportunities and problems of electric mobility. The 9-3 ePower Concept features a 184 hp electric motor powered by a lithium battery pack of 35.5 kWh, located instead of the gas tank. Performances are good: acceleration from 0 to 100 km/h in 8.5 seconds and top speed of 150 km/h. Battery life is not the best but in average with other first-generation electric cars: 200 km, with recharge times ranging from 3 to 6 hours. EPower project is carried out in cooperation with various partners such as Boston Power for batteries, Electroengine for electric motors,  Innovatum for project management and finally the Swedish Power Circle. The goal, according to the Managing Director Jan Ake Jonsson, is to be in the electric car market by 2015, when annual sales of electric vehicles will reach 500,000 units, “The Saab 9-3 ePower is our first step in developing production’s potential of vehicles that will offer high performance that our customers expect. ” Meanwhile, the Chinese have acquired by the General Motors (when Saab was still in balance between the sale and the failure of the company) the production’s right and technologies of the old 9-5 and 9-3, which in China is presented as C60.