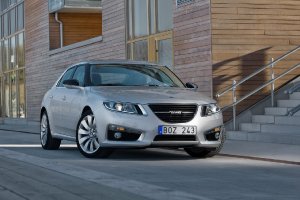 Saab announces the 9-5 Wagon’s debut at the Geneva Motor and reveals the first official image of the model for the family one year after the sedan’s arrival on the market. Soon but after the debut reservations for buyers will be accepting , while first deliveries are planned for September 2011, at a price slightly higher than the sedan.

The rear design shows the strength and sophistication of the sedan’s style, confirming what that has been seen hitherto in spy photos, with the wraparound glazed surface and rounded shapes headlights. In the luggage will be available a compartment floor – folding adjustable to position the load, the U-Rail system for securing and a lower waterproof luggage compartment, in addition to the folding rear seat with 60/40 scheme without removing the headrests. The space available will vary from 527 to 1600 liters, with a maximum length of 1962 mm and the rear hatch will be opened electrically by remote control or touch panel above the rear plate number.