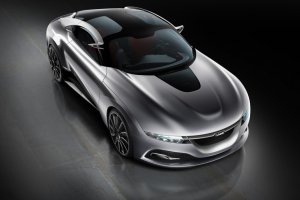 Saab Phoenix Concept introduces the style ‘Aeromotional design “, drawn by Jason Castriota, head of the Swedish brand’s design, which has changed owner just a year ago from GM to the Dutch Spyker, narrowly avoiding bankruptcy. The prototype wants to signify the rebirth of the Swedish brand based on the new platform planned for the future Saab 9-3 equipped with a hybrid system which also allows four-wheel drive, according to a roughly similar project of Peugeot, Volvo and Land Rover.

4WD HYBRID: The Phoenix Saab Concept is powered by a hybrid system resulting from the synergy between a 4 cylinder 1.6 turbo 200 hp (Mini Cooper origin) with a 34 hp electric motor for the rear wheels. The system called eXWD will be the basis for the Saab hybrid to come. This configuration provides an average consumption of 5 liters per 100 km with CO2 emissions below 120g/km. The system eXWD Phoenix works in tandem with the gasoline engine and is managed by touchscreen system Saab IQon (based on Google Android). Through it you can choose between “Eco-mode” to save fuel, “Traction-mode” for enhanced grip on difficult ground and “sport-mode” which optimizes performance by filling the ‘hole time’ in the delivery of torque resulting from the passage between the first and second gears. With this setting, the Saab PhoeniX accelerates from 0 to 100 km/h in 5.9 seconds and reaches 250 km/h.

SCULPTED BY WIND: The Phoenix boasts a Cx factor of 0.25 due to its drop-shaped design, the rear fins that channel the airflow to the tail while handles and mirrors are absent. The cockpit has 4 seats scheme (2 +2) allowing access through two doors hinged at the top with gull-wing opening. The Phoenix Concept Saab is 4.42 meters long, 1.87 wide and 1.33 high.