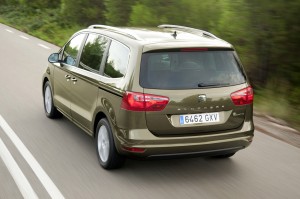 The big MPV Seat Alhambra is coming to car dealers in Europe. The Seat people carrier vehicle, now in its third generation, shows a completely new model built on the base of “cousin” Volkswagen Sharan with which it shares the chassis, most of the components and engines. Proportions and size of the new Alhambra – 4.85 m long, 1.90 m wide, 1.72 m high and a wheelbase of 2.92 m – are almost identical to those of the new Sharan, which is then extra 22 cm longer than the previous Alhambra.

Seat Arrow Design: the most differences between Sharan and Alhambra are in the front side, punctuated by the classic Seat Arrow Design and larger air intakes. A key feature of the Alhambra are the sliding rear doors, which, in the top version, are electrically operated from inside by a button on the console and on central pillars. Sliding doors also can be opened by remote control, but for security reasons can not be opened while you refuel.

5 or 7 seats: the new Seat Alhambra is available in 5 or 7 seats. In the second option (available with 2-3-2) is equipped with the mechanism EasyFold “that allows you to fold-away second and third row, in case you need to maximize the cargo space,  in the version with 5 seats is 809 liters (up to 2430 liters with the second row reclining) and 267 liters expandable to 2,297 if you break down the second and third rows in version with 7 seats. Packs equipment for the Spanish people carrier are two: Reference and Style. The first series offers: 7 airbags, ESP, tire pressure gauge, electrically adjustable and heated door mirrors and 3-zone Climatronic. With extra (average) 2,200 euros, the Style Pack provides the third row of seats, roof rails, 16 ” alloy wheels , fog lamps, cruise control, audio system with 8 speakers and USB connectivity with steering wheel controls, rain sensors  and tinted rear glass.