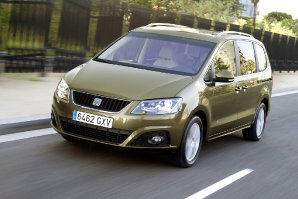 Seat has just unveiled the Alhambra with four-wheel drive, a five or six-seater people carrier that uses a diesel engine. The four-wheel drive system, according to Seat, is developed not only to improve driving safety, but also the driving pleasure, following the brand philosophy.

Seat Alhambra 4wd comes with an advanced electronically controlled four-wheel drive, in case of front’s wheels slippage, the electric pump increases the oil pressure to transfer more power to the rear wheels. The four-wheel drive system is combined to the 2.0-liter TDI diesel engine with 140 hp. An engine of 1,968 cc with four-cylinder turbocharged.

The 2011 Seat Alhambra TDI 4wd gets a top speed of 191 Km/h and accelerates on the 0-100 km/h in 11.4 seconds, 158 g/km of CO2 with a consumption of 6 liters per 100 Km, values ​​also possible thanks to the energy recovery system and the start & stop, which are standard in the pack Ecomotive. The MPV is offered as five-seat version with packs Reference and Style, while a six-seat Alhambra toward the end of the year will be available.