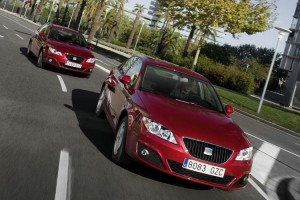 Seat Exeo is expanding its range with the arrival of a new petrol engine, the 1.8 TSI 120 hp, which is to take the place of old 1.6-102 hp, as entry-level model for the Exeo. This longitudinally four-cylinder engine with direct injection and turbocharging,  is now at its second evolution, generates 88 kW with a torque of 230 Nm between 1,500 and 3,650 rpm and is available for both the sedan and station wagon.

Improved performance: data reported by Seat say that Seat Exeo 1.8 TSI significantly improved  its performance, the sedan can reach a top speed of 202 km/h with a step from 0 to 100 km/h in 10.6 seconds, for the station wagon, however, 196 km/h top speed and 11.1 seconds to reach from rest to 100 km.

Fuel economy: At the same time fuel reduced consumption and emissions, on average, according to the spanish manufacter, which stop at 7.3 l/100 km on combined cycle and 169 g/km of CO2,  for the wagon version goes bit up to 7.4 l/100 and 172 g/km.

Seat unveils the Mii, one more city car based on the VW up!