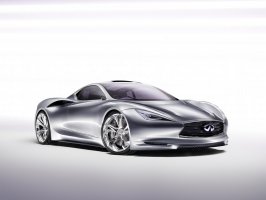 Recently Infiniti unveiled its supercar coupe in Geneva to standing ovation. It’s beautiful, British-designed, mid-engined and a hybrid, too. If this is Nissan’s way of lobbying for attention in Europe, you could say they’re turning heads with this plug-in hybrid that was hailed as one of the “showstoppers”, and which matches impressive design with DNA from the Lotus Evora 414E coupe (unveiled in 2010).

Referred to not as a concept car but a “prototype”, this sports car was put together in Cranfield, Bedfordshire, where Nissan’s engineering centre teamed up with the UK Government’s Technology Strategy Board to focus on producing a low-carbon car, and indeed the Emerg-E’s statistics are impressive.

The the Emerge-E is boosted by a petrol engine linked to a lithium-ion battery pack and two-electric motors, accelerates from 0 to 60 in 4 seconds, and producing a top speed of 130 miles per hour in about 30 seconds.

The way it works is the e-motors (150 kW each) drive the rear wheels together, giving the car heavy acceleration at about 201 horsepower, while the range-extender engine (47 horsepower) functions as a generator, setting the low top speed but providing sustained engine power.

Although the engine was built in Europe, the concept was sketched in Southern California by Infiniti designer Randy Rodriguez, but modelled in London, making this something of a global sports car. Its carbon-fibre skin wraps around a light aluminium chassis (borrowed from the Evora), and overall the Emerge-E weighs just 1,600 kg.

One result of the car’s lower top speed is that there’s less necessity for cooling apertures that a more powerful combustion engine might need, and hence the Emerg-E is very pretty. Hailed as one of the slinkiest, coolest looking concepts to be unveiled recently, Infiniti can be satisfied with what they’ve done here. Cranfield reports that they’re hoping to have the Emerg-E in production with few emendations by 2016.