SMART SHOWS ITS ESCOOTER AT PARIS 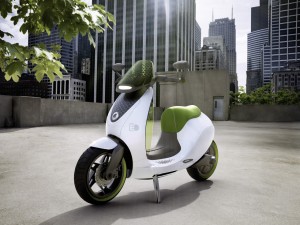 Smart officially presents escooter, the electric scooter from the German brand shown in recent days at Paris Motor Show (2-17 October). Albeit with two wheels less, the new escooter inherits a part and some details that have made the fortune of the “big sister” on four wheels and which could assist in the car sharing project car2go.

Design and Technology Smart: Aluminum and steel frame, LED tecnology on lights and other safety devices imported from the automotive world, as the blind angle control system and ABS, these are some of the main features of the Smart escooter. The 4 kW electric motor provides power to the rear wheel by a pack of lithium-ion 48 volts battery, allowing a maximum speed of 45 km/h. The rounded style and bi-color white/green, recalls the smart ED, the body is made up of interchangeable plastic panels as smart four-wheeled. Smart e-scooter has many original features such as transparent protection to the sides that not only protect your legs but act as turn signals, an extra seat for the passenger so reminiscent of the 60’s Lambretta. The most original is the light-handlebar group, with a massive windshield with integrated LED headlight and mirrors “bar end”.

The range can reach 100 km and the charging can be done by a standard 220V power outlets in 3-5 hours through the connector Mennekes positioned at the center of the front shield. Charge shall also keep up by photovoltaic panels, but also energy is recovered during braking. From the cycling perspective the two bicycle wheels are mounted on 2 different size forks while braking is using combined through a hydraulic disc brake at front and traditional resistance from the electric motor action so that it becomes a generator. Smart escooter can carry two people and the tail section can contain as many as two helmets.