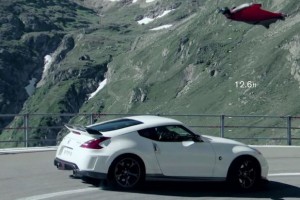 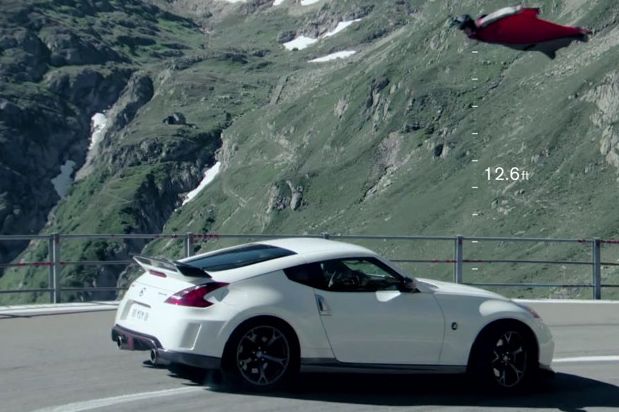 Regarding its newest ad, Nissan combined a racecar driver in a 370Z Nismo, a BAS jumper in a wingsuit and a Juke crossover with three computer screens to the Susten Pass in the Swiss Alps. As bizarre as the combination sounds, the formulation achieved was perfect for an motion-packed exhibition of man compared to machine in a race to the end of the pass.

The 2014 370Z Nismo is being driven by Germany’s 2012 Nissan GT Academy Champion, Peter Pyzera. With its wingsuit, David Barlia drops 4,501 feet in reaches speeds of up to 210 km/h (130 mph). During his flight, Barlia goes as close to the tock as six meters. On finishing of the drop, Nismo Athlete Pyzera commented: “That was absolutely amazing, I could see Dave up above me and I just had to concentrate and get in the zone to beat him down. Afterwards we looked at the data we gathered from wearing the biometric harnesses, which monitor my biometric data, and I could see when I was totally focussed. While this is fun, it is serious business – it not only improves my performance it is invaluable in helping me prepare for my next race.”

Nissan says there will be more short films like this to showcase its Nismo cars and athletes.

Check out the video: