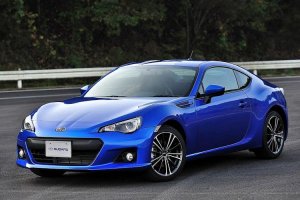 Subaru has finally unveiled the all new BRZ at the Tokyo Motor Show and we also get the first real pictures of the model that is also the sister of the new Toyota GT 86. First features shows what we expected, because the joint-venture between Subaru and Toyota gave as result two coupe sharing the identical engine, power-unit and consequently the same horsepower numbers. First impressions get more confirmations – apart from different front/rear bumpers and the loss of the rear spoiler – with the Subaru getting a simple side air intake while the Toyota has an ‘86’ logomounted.

Specifications and technical aspects of the Subaru BRZ.

Developed in conjunction with Toyota, the car is equipped with Subaru’s horizontally opposed 2.0 liter 4-clyinder direct injection “Toyota D-4S” powerplant that delivers 200 hp at 7,000 rpm with highest torque of 205 Nm at 6,600 rpm. The engine has been positioned lower than any other Subaru’s engine, this to allow the sports coupe a super low center of gravity and highest driving efficiency. The Subaru BRZ featuring a lightweight, rigid platform for excellent handling and performance, is considered a proper sportscar. It’s going to be very intriguing to see the way the two companies Subaru and Toyota will submit a distinct marketing message for two such similar automobiles. Subaru BRZ Concept STI