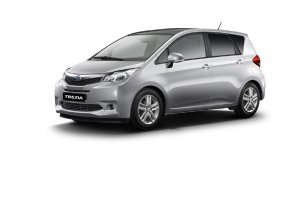 The most attentive observers have already noticed the resemblance to the Toyota Verso S, which goes on sale in February. The Subaru Trezia , in fact, derives from this model but differs from twin Toyota in the front grille – featured by a honeycomb shape –  and in the rear with cut lights design.

The engine is also derived from Toyota: a 1.3 liter petrol and a 1.4-liter turbodiesel combined with a manual and a CVT automatic transmission. Nissan says that the turbodiesel engine has CO2 emissions of 113 g/km.

Subaru will show, at Geneva two  more preview:  a project developed in collaboration with Toyota, which has already begun the  Toyota FT 86 concept and will become a road car in 2012. The other is the Impreza concept, already shown at the Salon in Los Angeles.

Previous post: 2012 CHRYSLER 200 CONVERTIBLE to be Lancia Flavia in Europe