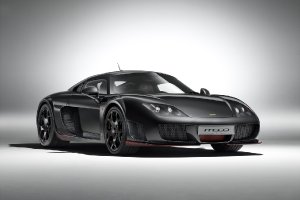 Noble has just unveiled first pictures of the M600 ready for production. The new supercar of the small British manufacturer, will

come into market in April but was already present in 2009 at the Goodwood Festival as not definitive model. The supercar that goes into production, however, differs from the first embryonic version. The Noble M600, in fact, now has a body made entirely of carbon fiber, better finishes and a light weight of 1,250 kg.

Mainly news is its abandonment scheme of the 6-cylinder in favor of the 4.4 liter V8 bi-turbo 650-hp and 818 Nm, with a return that has finally convinced the designer to opt for the change. The transmission managed by a 6-speed manual transmission is designed to achieve an acceleration of 3 seconds in the 0-100 km/h. Declared mass is 1250 kg wich is a key to achieve these performance, while the top speed of 362 km/h can be attributed to engine and aerodynamic qualities.

ADJUSTABLE POWER: on the Noble M600 a knob would allow the driver to lower the power, about to 450 hp, to make the car more stable in case of suboptimal adherence. Brake system is by Alcon, with 380 mm front discs and 350 mm rear.

Noble, who has not yet released prices of its custom-built, reported to have accumulated about 50 orders. Considering that each car takes about a month’s work and that deliveries will begin in April in the UK, customers must have patience. The Noble M600 offers standard equipment such as navigation system, Alcantara and leather interior and a traction control system wich can be switched off.