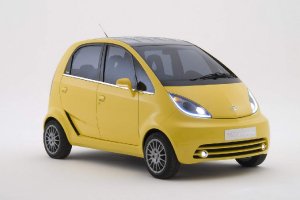 Tata Nano, a low-cost city car at less than € 2,000 with extreme fuel efficiency, it probably becomes even more green with a new diesel engine developed together with Bosch to arrive in the Indian market already by end of year.

Tata Motors has unveiled, through the local newspaper “Business Standard”, that its minicar will get even 40 Km per liter, thanks to the project with a 700 cm3 two-cylinder diesel engine, which produces a decent power without increasing consumption. The Indian concept car could become reality by the year already. Tata Nano diesel, after versions petrol and electric, would allow Indian drivers to pay about € 0,62 per liter compared to the current rupee and gas-oil cost in the country.

The Nano is a small car with plastic body, 3.10 meters long and approved for four people. It ‘s a project for the Indian market, but given its features may also be successful on the European market if adapted to safety regulations and the final cost would still be very competitive. The new Tata Nano diesel, should be launched at India’s dealerships in India at about € 2,700.

**Updated 01-may-2011 After early discussions about whether to use plastic body panels, the company stuck with a steel body but minimized curves to reduce the number of dies needed to make each panel.