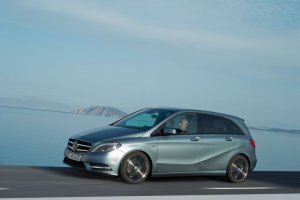 The Mercedes B-Class ahead this month’s Frankfurt motor show.

One of the most important news that we will see at the Mercedes stand at the next Frankfurt Motor Show in mid-September will be the new Mercedes B-Class a MPV that shows the new front-wheel drive platform on which will be built the future four-door CLC coupe and the Mercedes Shooting Brake.

The 2012 Mercedes B-Class features all new engines, gasoline and diesel, which will power also the future small model of the german brand. The Mercedes B-Class will be offered with two 1,6-L from 122 hp and 200 Nm of torque at 1,250 rpm/min (B 180) and a 156 hp and 250 Nm at 1,250 rpm (B 200). The family of turbocharged gasoline engines, called M270, inherits the latest and third-generation of the direct injection with piezo injector, ans launched in 2010 on the V6 and V8 BlueDirect.
The diesel engines stand out a four-cylinder common rail turbo-diesel, which is derived on the OM651 fitted on other Mercedes models and has been improved in several details.The transmissions of this Mercedes B-Class are two: a six-speed manual and automatic dual-clutch transmission 7G-DTC, which is compatible with the Auto Start & Stop system. The displacement on this Mercedes B-class has grown to 1.8-L and, like the petrol, is on hand with two power levels: 109 hp and 250 Nm of torque at 1,400 rpm for the B 180 CDI and 136 hp and 300 Nm at 1,600 rpm for the B 200 CDI.

The new Mercedes B-Class relies on the most advanced electronic systems as the standard equipment comes with the Collision Prevention Assist which prevent and/or reduce the negative effects of a crash even at speeds above 30 km/h. The Mercedes B-Class features als a radar that detects the risk of a collision, and quickly activates the brake assist, so when the driver presses the brake pedal the braking will be as effective as possible. The Mercedes B-Class, which will be in dealerships in November, may count on the PRE-SAFE system.

Next post: 2012 Toyota Camry – the best selling car in America for the last years