The BMW i8 Launches in Frankfurt 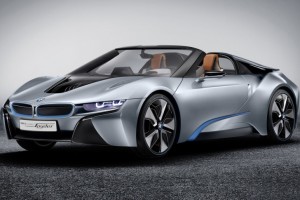 Always one of the biggest events in the motoring industry calendar, the hype around the annual International Motor Show in Frankfurt was cranked up a notch this year as the event celebrated its 65th year.

Leading the buzz in front of the flashbulbs and flashier models this year were the home country’s own manufacturers. Audi courted a lot of media attention as they premiered a concept of the reworked hybrid take on their classic Quattro, but whilst many were whispering Vorsprung Durch Technik, one of Germany’s other big manufacturers were stealing the show.

BMW chose Frankfurt to premier their new ‘i’ range, and the glitzy launch of both the i3 and the i8 brought a lot of big name attention, with none other than German Chancellor Angela Merkel taking time to view the vehicles at close quarters. We covered the family focussed BMW i3 on Europe Car News last month, so now let’s take a closer look at its sleeker sister, and a car we will all soon be clamouring to take out short term car insurance to test drive, the sporty i8.

DESIGN
Unlike its more conventional sibling the i3, which is produced in a striking two-tone colour-way, the i8 is of a more conventional single colour and, as you would expect of a sports car, much sleeker too. According to BMW the i8 is “a flat silhouette” of “powerfully-formed surfaces and precise lines. The futuristic dihedral doors certainly aid the sporty appearance of the i8, something that will offer a little consolation when you realise that you can’t open them whilst in your garage.

KEY FEATURES
The three-cylinder 1.5 litre turbo-charged engine of the i8 drives the rear axle with a powerful 231 horsepower, whilst an electric motor containing a further 131 horsepower in a two-speed automatic power-source drives the front wheels. Impressive speeds of up to 120 km/h are capable in the electric mode and the i8 also benefits from being relatively quick to charge; reaching a full charge from a 110-volt outlet in under 4 hours.

PURPOSE & VISION
Through their new ‘i’ range BMW are in effect making a two pronged attack on the hybrid market. The i3 corners the suburban family audience whilst the i8 powers head first into the ever expanding market of sports hybrids. Wowing Chancellor Merkel in Frankfurt was also a key aspect of BMW’s strategy as Germany’s Government has a target of getting 1 million electric cars on the road by the end of the decade. With potential tax-breaks in the offing for manufacturers who help drive towards this target it is certainly in BMW’s interest to go after the eco-conscious audience.

EXPECTED MARKET
The i8 isn’t a car for the everyman, set as it is to go on sale initially with a six figure price tag. And being a sports car the layout doesn’t exactly shout ‘family road trip’ or low temporary car insurance at you, not unless you pack incredibly lightly, and leave your children behind. As such BMW have indicated that their target market is tech-savvy men over the age of 35, so those with the money to invest and enough of an environmental consciousness to plump for a hybrid .Though the up-front costs may be high, the comparatively cheap cost to run, with subsidies from the Government for installing electric power points, and the option to use daily car insurance if it is to be your weekend tear-up when you get back from the city, the i8 may just prove to be the sports car of the future, and duly worth its Frankfurt hype.