Toyota EV the concept to be electric iQ 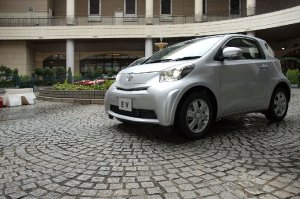 Toyota EV concept debuts at the 2011 Geneva Motor Show,  the model is nothing more than a electric iQ. The Japanese zero-emission city car should arrive to the automotive market in 2012, after a phase of development and refinement of all the subsystems that will last throughout 2011.

The electric unit, which provides traction in the Toyota EV concept, comes from the powertrain used on the Auris HSD, Prius, Plug-in Prius and Lexus.

The small city car EV is Hybrid Synergy Drive (HSD) based, and according to data reported, has a range of 105 km. Its engine, derived directly from that adopted by the hybrids Auris HSD and Prius, powered by a pack of lithium-ion batteries, located under the floor, takes minimal space and does not affect the comfort or the trunk.

So far the carmaker has not provided further information and the price is yet to be determined.