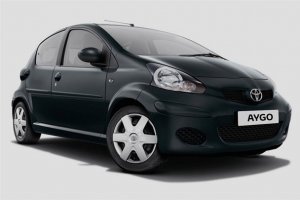 Toyota has officially unveiled the latest addition to the Aygo family, the Aygo Ice, which they company say is an entry model that will provide customers with not only comfort, but elegance as well. The new variant on the popular Aygo city car, the Aygo Ice, which was released earlier this month, focuses more on luxury and style with a model that includes air conditioning, leather and Alcantara seats, electric windows and leather-trimmed steering wheel and gear stick as standard.

Featuring Toyota’s award winning low emission 1.0 litre VVT-I petrol power plant, the Aygo Ice also comes with the choice of manual or multimode transmission, a six-speaker integrated audio system, and colour matched mirrors. Available in a choice of three metallic paint finishes, consumers can choose from Crystal Silver, Dark Forest or Vermillion Red, this new entry-level Aygo model also offers three and five door models, 6.14 mpg in the combined cycle and a 3E insurance group rating. Although these extra features do mean that the Ice model is more expensive than the earlier Aygo+, around £655 more than the usual RRP in the UK alone, consumers will be getting a lot more for their money with the Aygo Ice.

As with the original Aygo, the Aygo Ice is the urban friendly choice for people who live in towns and cities, but while earlier models were suitable for all users, the Ice, with the emphasis on style is more suited to younger drivers, or those without children.

Next post: Koenigsegg CCR by Edo Competition tuned to 891hp