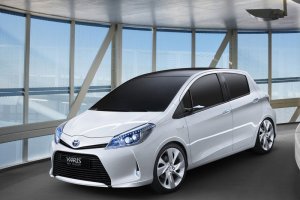 The debut of the new Yaris HSD as a production car (Hybrid Synergy Drive) – the innovative prototype presented at the last Geneva Motor Show – will be around the end of 2012. One of the most significant features of the Japanese city car with its third generation  is to  have in the range a hybrid version.


The new hybrid model – recently introduced as a concept car in Geneva – anticipates the future Yaris design, but adding a number of aerodynamic devices created to optimize fuel consumption and emissions called Hybrid Synergy Drive (HSD). Among major changes is a new front bumper very edgy with a large central opening, a small grill, alloy wheels with low-resistance tires, side skirts and a spoiler on the rear window. Very thin cameras replaces the conventional mirrors.

The Toyota Yaris HSD presented as a concept car can move in electric-only mode. The solar panels on the roof, supply independently the air conditioning system, however it is unclear whether the system will be extended to the production Yaris HSD.