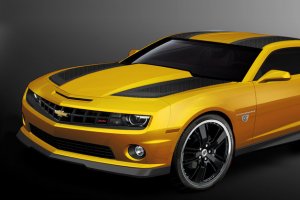 The Chevrolet Camaro prepares to debut a new version called  Transformers Special Edition whici in Europe is expected by the end of the year. The special edition is designed to celebrate the launch of the third series dedicated to the Transformers movie, entitled “Dark of the Moon”.

The changes which have made the Camaro similar to the protagonists of the famous series, produced by Paramount Pictures and DreamWorks, regard an optional package for LT and SS versions and will be the only alternative available to Europe priced at about 2,100 euros.

The Chevrolet Camaro Transformers Special Edition stands out the “Rally Yellow” tint which includes the same optional as the top of the range RS but with the addition of longitudinal black stripes, rear spoiler and blacks 20 ” alloy wheels with logo “Autobot Shield ” which is also shown on sides and front seat head rest. The cabin features the interior “Transformers” with yellow stitching contrasting the black leather covering for instrument panel, seats and the armrest. The special package can be ordered in Europe from September and then will be marketed in Japan, China, South America and Arab nations.