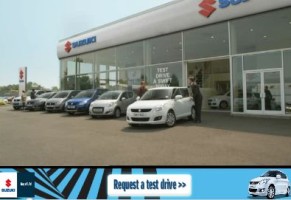 Suzuki is running a television advertising campaign in the UK “named Have To Have It” focused to promote the Swift as well as the complete line up. The Never Ending Drive” show potential buyers who are testing the car and being so pleased with their very first experience of the new car they end to not leave it anymore.

The commercial video has been created by the advertising agency The Red Brick Road which started the sponsored plan from the simple percentage that more than 50 per cent of the people who test drive any new Suzuki, buy a Suzuki. On the specific case of the Swift model, over 56 per cent of potential customers who tried the car in a test ended to buy it. The ca manufacturer also claims a 63 per cent purchasing after test drive with the Alto.

Previous post: ONE DRIVING LICENCE FOR ALL DRIVERS IN EUROPE