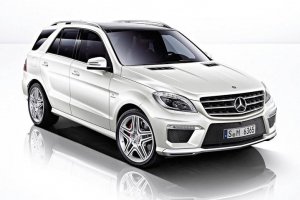 The German car maker has taken the covers off from the redesigned 2012 Mercedes-Benz ML63 AMG which goes on sale in Europe’s market in the first quarter of next year.The top-quality SUV’s will be powered by a twin turbocharged V8 engine 5,5-liter direct-injection that delivers 525-hp at 5,250 rpm and 700 Nm of constant torque between 1,750 and 5,000 rpm. Whit the AMG Performance Package, the Ml63 delivers more power thanks to an higher pressure in the turbo, which went up from 1.0 to 1.3 bar. The power increases to 557 horsepower at 5,750 rpm with 760 Nm maxinum torque between 2,000 to 5,000 rpm.

Along with the massive exterior design including additional aero body parts and massive wheels, the ML63 AMG gets a leather steering wheel, AMG sport seats, red brake calipers and carbon-fiber engine cover. To Keep the new SUV on the ground is a new active roll stabilization system along with automatic level-control, adaptive damping and Airmatic air suspension.

According to the German car manufacturer, both the increased power and maxinum torque favorite the acceleration time on both engine’s version, 4,8 e 4,7 seconds respectively. The bumping top speed rose from 250 to 280 Km/h but is still electronically limited at 250, while fuel consumption is declared at 11,8 l/ 100 Km for both engines .