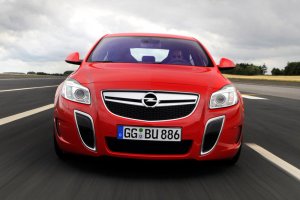 Insignia VXR a leader in its segment.

With lower tax bills and a whole host of splendid new features, the Vauxhall Insignia VXR, called Opel Insignia OPC in other european countries, is taking the motoring world by storm. In the last two years a whopping 400,000 have been sold, more than a quarter of which were bought in the UK and 80% of which were acquired for use as company cars. It has outshone previous favourites such as the Ford Mondeo and Mercedes C-Class to become the leader in its field – so what is it about it that has proved so appealing?

Same power and lowered emissions for the new Insignia VXR.

Well, where do we start? Its familiar shape – not dissimilar to the Vectra, but with some shiny new additions such as new alloy wheels – belies a number of improvements which have clearly meant the difference between being run-of-the-mill and something to write home about – between a car to do the shopping in and one which enters the realms of the sports car. The 2011 Insignia VXR engine is no less than the latest 2.8 litre 24v Turbo V6, which allows the Insignia VXR to do 0-60 in 5.9 seconds. It has four-wheel drive and boasts 325 brake horsepower – and the best thing is, it matches this power with impeccable handling. It offers electric power steering, low rolling resistance tyres and hidden aerodynamic panels, all features which combine with the engine spec to help produce a car which is good news for those who are concerned about their carbon footprint: emissions are down from 179g per kilometre to just 134g. This aspect of this excellent car is doubtless behind its appeal for businesses, who are buying them in their thousands for use as company cars.

The Insignia is, in short, a magnificent addition to the Vauxhall range, and one which has taken Vauxhall to new heights in its market.

The Insignia’s range of impressive gadgets will surely also have had a big hand in its success. It has a camera system which offers both Following Distance Indication and Forward Collision Alert, warning drivers when they are following a car too closely. The satellite navigation system (not standard, but taken by 29% of buyers) is clearer and easier to use. Furthermore, comfort has not been neglected, with the interior boasting luxurious leather seats which are normally the preserve of far more expensive cars. This means that the Insignia VXR can accommodate friends and family comfortably too, giving it wide-ranging appeal.