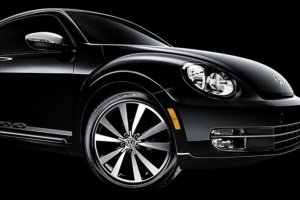 The new Volkswagen Beetle will arrive in the U.S. market in September, but the fans, of the glorious model, that live in the state of the Stars and Stripes may order one of the 600 cars of the version Black Turbo Launch Edition, by paying 495 dollars as a deposit on the web.

The new special version of the Beetle Turbo Black shows the logo “Turbo” on the sides, the exclusive body color pearlescent black, a new rear spoiler, lowered suspension package and an innovative coating material similar to carbon fiber for the the dashboard.

The new Beetle, dressed all in black, aims to attract customers who love the sportiveness with the 2.0 TSI engine by 200 hp that have the 6-speed manual transmission offered as standard or the sports suspension and dual-clutch DSG at the price of about 24,950 dollars (taxes excluded). In Europe, however, the limited version of the Volkswagen Beetle will arrive in autumn, between October and November.