Volkswagen Bulli Concept is a return to the past revised 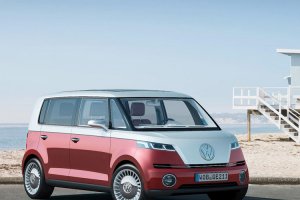 The Bulli protype exposed at the recent Geneva Motor Show would have abtained the permit for production from headquarters of Volkswagen group. The minibus Bulli born expecially as green vehicle and involves the use of an electric motor. With this latest revision, the van of the 60s and of flower – designed for the first time in 1947 – reappeared in the third millennium, focusing on square shapes, the two-toned and ultra-flat seats to offer as much space as possible. The style in this new MPV will make it instantly recognizable without being extravagant, recalling old 60s hippie van but smart and advanced. For Volkswagen is the second “vintage” attempt after launch, in 2000 the hapless New Beetle, after first large sales became a nagging source of loss.

COCKPIT: car versatility depends on the interior configuration. The arrangement in two passengers rows follows the sheme “3 +3”, which made famous the Fiat Multipla and was recently even imitated by the Honda FR-V. With all 6 seats occupied, the smallest load of the luggage compartment is 370 liters, which increase up to 1,600 with the seats folded. In this way, you get a load floor 1.8 meters long, to stow typical leisure’s equipment such as surfboards or snowboards and immediately associated with this type of vehicle. The center console stands with the iPad housing and exploits the absence of a gear lever – replaced by a knob to select forward or reverse – to have greater space.

MOTOR: according to the brand of Wolfsburg, a battery pack from 85 kW and 270 Nm of torque gived power to the Bulli motor and would allow the autonomy of 300 kilometers. The prototype is expected to reach the top speed of 140 km/h (electronically limited) with a sprint on the 0-100 Km/h in 11.5 seconds.

Prices, according to rumors should start from € 22 000

Next post: Renault R-Space Concept the future of MPVs