Volkswagen Golf Cabriolet is back 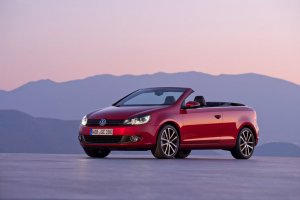 The Volkswagen Golf Cabriolet is back in 2011 with a new design and without the traditional roll bar this time, while in the past it has marked all cabrio release. The Production of new Golf Cabriolet was launched in Osnabruck pant in conjunction with the premiere at the recent Geneva Motor Show.

The roof of the Golf Cabriolet, is controlled by an electro-hydraulic mechanism that can be opened in just 9.5 seconds and even with the car on movement up to a speed of 30 km/h. Six turbo engines are available, all direct injection with a power range between 105 and 210 hp, either gasoline or diesel. Some engines can be combined with the dual-clutch DSG automatic transmission. Good fuel consumption and emissions, for istance, the Golf Cabriolet 1.6 TDI 105 hp Technology BlueMotion shows the average consumption of 4.4 liters per 100 km and  117 g / km of CO2 emissions.

The 2011 Volkswagen Golf Cabriolet is already booked in Germany, with prices starting at € 23,600.