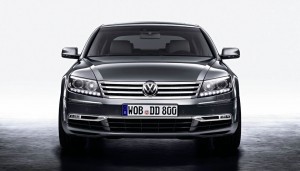 The 2011 Volkswagen Phaeton, opulent and full of chrome details, comes to European dealers with engines V6, V8 and W12. The luxury Volkswagen sedan reveal its revamped version with improved details and contents. The  German flagship has undergone to aesthetic alterations, that do not distort the original design, with the primary target of selling in the Chinese market (Volkswagen sells in China over 2,000 phaeton per year).

The 2011 Phaeton has the front following horizontal lines and is more impressive thanks to the role of the redesigned bi-xenon headlights and indicator lights with LED technology as standard. Horizontal lines stand out too in the dashboard, where stands the wide panel for the air conditioning distribution (four-zone Climatronic) and the 8″ touch screen matched the info-telematic system board and radio-navigation with 30GB  iPhone compatible. The system has the ability to make a connection to Internet via Bluetooth device (fitted as standard) and can see the Google maps, data loads online by phone and through a dedicated proxy server. On the new Phaeton will also be available some very sophisticated driver assistance systems as the road signs recognition with on-screen display, then there are valuable devices for security systems like the dynamic lights adjustment, the automatic adjustment of the distance,  a device to assist the lane change and the system monitoring the tire pressure.