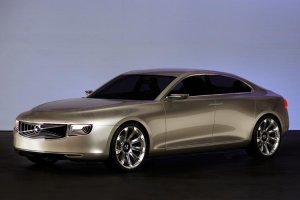 Volvo has unveiled, during the Shanghai Auto Show, first pictures of the prototype Universe, a large luxury coupe, four-door, anticipating the intentions of the new Swedish style for the brand. The company states that “the Universe Volvo Concept is not based on any other platform and is not specific to any particular market”, then it is likely that soon should be submitted to a second stage of the project, which develops the mechanics and technologies for a production model. The Universe would be part of the luxury-sedan of segment F and above the Volvo S80 to compete with the famous and powerful competitors such as BMW 7 Series, Audi A8 and Mercedes S-Class. The Universe does not preview a Volvo model dedicated to a specific market but a global modela, although the demand for luxury cars in the Asian market is growing.

DESIGN: the prototype Volvo Universe show simple lines, as the Scandinavian tradition, but a complete break with the current style, is 4.95 meters long and 1.90 wide and the wheelbase is well above average: 3 meters to offer comfort and space to passengers whom have access facilitated by a reverse-opening doors without B-pillar, obviously this is a show-car solution and probably will not be adopted on any production model.

Most original interior part is definitely the dashboard, very inclinated and shows a large touch screen to control most car functions. The central tunnel has an automatic transmission with disappearing shifter, when the engine is off it reclines in a special compartment.

The front features its new, large and horizontal grill, small square shaping headlights and a “hump” on the hood which stretches along sides. The roof is rather slopend and joins the diamond-shaped lights linked by a thin led strip.

Next post: 2012 Jeep Grand Cherokee SRT8 most powerful Jeep ever